The bandicoot’s first game came out in 1996 for PlayStation to become one of gaming’s most renowned titles.

It was developed by studio Naughty Dog, now famous for masterpieces such as the Uncharted franchise and The Last of Us, although the series has seen games developed by many other big names in the industry such as Beenox and Vicarious Visions.

Although the original was a 3D platformer, the franchise includes both party games and racing experiences such as the most recent installment under the Crash Bandicoot name – Crash Team Racing: Nitro-Fueled.

If you’ve loved the Crash series for years then you can probably imagine the crazy amount of merch out there. The collectibles seem almost endless and there’s so much stuff you can get to decorate your room, your office, or to just hand off to friends as fun gifts.

Take a look at these picks for the best Crash merchandise and gift ideas that any fan of the franchise is sure to love.

Let’s start off with this incredibly detailed figurine from First 4 Figures.

It’s based on the bandicoot’s appearance in the most recent revival of the franchise, and for that price both its size and quality are pleasantly surprising.

It’s an absolute steal, and it’ll also steal the heart of whoever you get it for. Or earn you the admiration of your peers if you get it to adorn your own living room or office space.

If there’s something I absolutely despise in the world of video-game platformers, it’s water levels.

Will I drown? Will I move slowly? Is a giant eel chasing me?

Anything is possible, and none of it is good… that is, except for this amazing Crash Bandicoot design.

It’s one of four figures created by NECA to honor the famous gaming icon.

Among its most interesting features are the fully articulated joints for increased freedom in regards to posing, and its striking amount of detail including textured fur.

For anyone who likes scuba diving or Crash Bandicoot, this figure is an amazing gift. Plus it’ll be fun to collect them all!

As a tie-in with a recent game in the Bandicoot saga(Crash Team Racing: Nitro-Fueled) the renowned memorabilia manufacturer Funko designed a series of vinyl figures depicting the characters from the game in their racing karts.

This highly-collectible set includes a variety of characters such as evil genius Dr. Neo Cortex, Coco Bandicoot and of course, Crash himself.

You can either get them all to complete your collection or start giving them out as gifts for your friends to discuss among themselves and remember you by.

Hit the gas and get them while they last!

Whether you’re looking for a companion piece to your Crash Bandicoot figurine or simply want something more discreet than the super-recognizable orange furball, this Aku-Aku figurine will do the job.

It’s among the most unique figures in Funko’s Pop! line, but retains the same high-quality as the company’s other products.

Crash is nothing without Aku-Aku’s guidance and his power-ups, and your collection isn’t either!

Along with the previously covered CTR: Nitro-Fueled line of figurines, Funko also added some related entries to their Pop! line.

The bandicoot’s insanity and intensity, tempered by Funko’s trademark cute style and simple yet deep eyes, becomes a special brand of adorable… kind of like a troublesome Chihuahua puppy.

This piece makes a great addition to any room.

Place him beside your console and let him watch you play, or add him to your little Funko Pop! altar. This colorful bandicoot is ready to drive his kart into your heart! 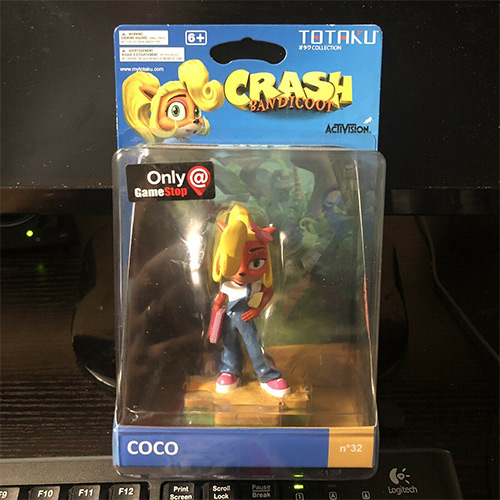 After appearing for the first time along with her brother on the franchise’s second installment, Coco has made herself a well-loved character among the game’s fans. Especially for girls who see her as a playable role model.

Where her brother shines for being fearless and more than a little crazy, she keeps a cool head and handles every situation with care.

The engineering bandicoot’s confidence, backed by extensive experience and talent, is certainly admirable. As is this rendition of the character by manufacturer Totaku.

It’s a perfectly small but colorful adornment that any fan of Coco is sure to want.

There are few things as cool yet dangerous as jetpacks.

All of this makes it a perfectly appropriate tool for the crazy bandicoot. It’s from the same NECA line of figures as the Scuba-diving Crash covered previously, and it maintains the same quality paint-job and attention to detail featured by its aquatic companion.

Few of us have friends who are jet-pack enthusiasts. But it’s still a nice gift for anyone who likes video games or extreme sports!

Plus, you have to collect them all, right?

Even if he’s a popular character among older fans, it’s easy to see why the younger ones might feel a little bit intimidated by the character’s unhinged personality.

The friendly expression on this plush from Kidrobot’s Phunny line should help to endear him to children, rather than scare them away. But you can still see the lack of self-control deep within those eyes.

It’s an officially licensed product too so it’s sure to please any collectors who care about authenticity.

And the soft premium-quality materials make it a great companion for late-night gaming sessions on the sofa.

From the same line of authentic plushies comes the most universally recognized evil scientist in all of Wumba Island: Dr. Neo Cortex.

Despite all of his despicable deeds, such as kidnapping and genetically modifying Australian wildlife, he’s still widely loved by the community.

It’s a perfect gift for any kid who’s objective in life is to become an evil mad scientist. Promote STEM fields! The evil part will sort itself out in time.

From the same Phunny line comes this genetically altered mutant bandicoot, based on her most classic design.

It’s just as soft and high-quality as the previous two. And like Dr. Neo Cortex, she could help promote STEM fields among younger generations. Especially girls who see the independent bandicoot as an example of what a girl can be if she puts her back into it. 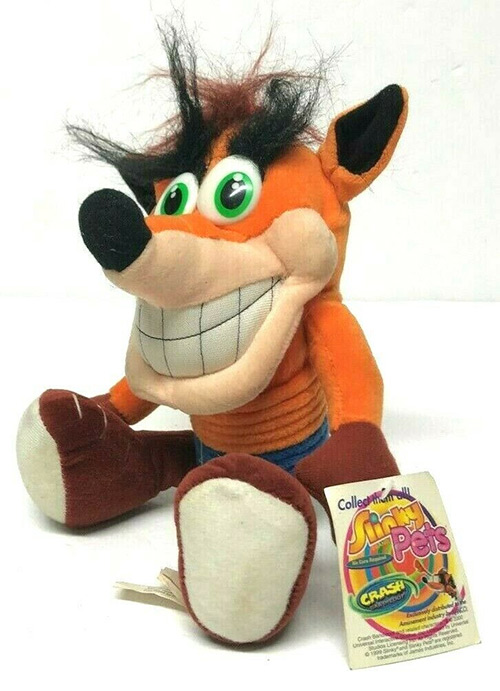 Crash’s crazy personality and penchant for absurd physics-defying antics make him a perfect character to get the slinky treatment.

This springy bandicoot is part of a larger line of slinky pets that came out during the early 2000s, near the peak of Crash’s popularity before his recent resurgence.

Which makes this a true vintage item perfect for die-hard fans.

Personally I prefer gifts that have a clear use rather than serving as mere decoration.

I don’t have that many surfaces around the house, so I need to make every square inch count!

So when I laid my eyes on this Crash Bandicoot holder, I totally lost my chill.

It can hold tablets, controllers, your Nintendo Switch, and anything you have to throw at it.

Plus it has some amazingly detailed paint and cool natural-looking hair(not to mention his rad Mohawk) which are perfect to add some personality to your boring old stack of entertainment systems.

I’d recommend it in a jiffy to any PlayStation fan, as the space between his hands seems perfectly suited to hold a classic PSP for exhibition or even the newer PS5 controller.

A job best done by one of the PS1’s most famous characters.

This TNT-box nightlight from Paladone sure brings back a lot of memories from the PS1 era of Crash Bandicoot games.

Unlike the character merchandise featured so far, this is one of those items that melds seamlessly with the background just waiting to be discovered by a true fan.

In the meantime, enjoy it in silence by laughing at your cleverness in hiding pop culture references in plain sight.

On the polar opposite end of the subtlety spectrum lies this intensely colorful blanket.

It’ll instantly turn a room into a Crash Bandicoot appreciation area, and it’s available in many different sizes to suit whatever bed or couch you have. 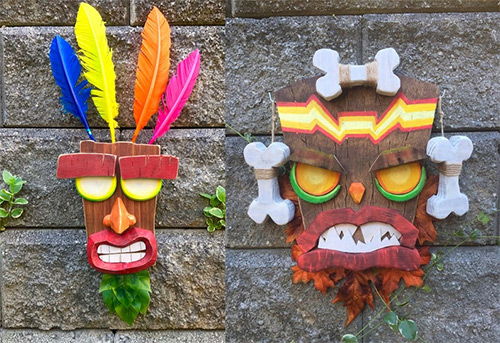 There’s good and evil, there’s light and shadow, the Ying and the Yang… then there’s Wumpa Island’s Aku-Aku and Uka-Uka.

Locked in an eternal conflict, these two masks now wrestle to catch your attention and become your next purchase.

They’re made by OssmannReplicas who uses sustainable sources to create his amazing pieces of art.

The main material for the masks is reclaimed wood, with branches used in creative ways. Every feather on the masks is natural and both of their menacingly hypnotic eyes are sections of thin wood logs.

No two pieces are the same here as the artist lets himself be guided by the material to give each piece its own unique flare.

They’ll look incredible hanging on the wall of any collector’s gaming room, and when people ask where you got them you can tell them all about your exciting trip to Wumpa Island. 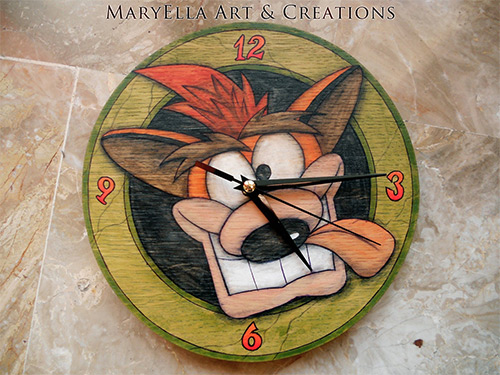 Something else that would look amazing on your walls is this Crash Bandicoot clock from MaryEllaCreations on Etsy.

The design is based on the game’s logo from back when the game was still developed by Naughty Dog.

It’s painted beautifully over oak plywood with pastel colors that’ll blend in nicely with most walls.

The hands on the clock are also customizable, and they’re available from a very classic black to an exciting glow-in-the-dark plastic perfect for a kid’s room.

Tick, tock, tick, tock – get it before this runs out of stock! 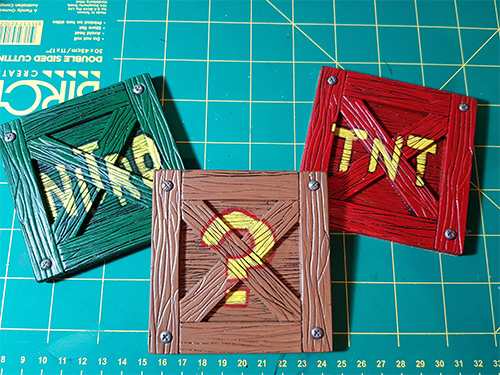 These super cool drink coasters from Propsmatic are among the most practical gifts on the list.

You really can’t go wrong with coasters, and they’re quite fun to collect!

These are made from cork and polyurethane resin, guaranteeing they’ll last you a long time and take moisture like it’s their job – because it is.

The design is based on the power-up boxes from the N-Sane Trilogy reboot of the franchise so they’re perfect for someone who just recently got into the series or classic collectors too.

Fun fact: These are made and shipped from Australia, where bandicoots are originally from! 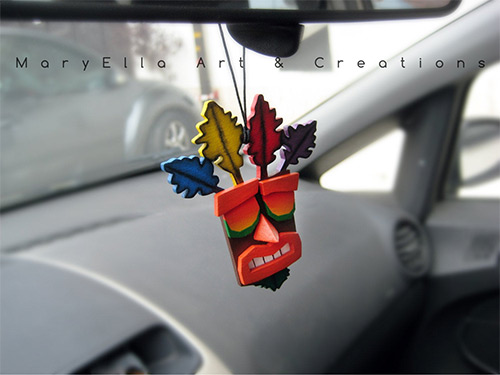 Merch to ornament your car is not something we see every day. Even if the franchise it’s based on has racing games in it.

This Aku-Aku decoration for your rear-view mirror is one of those unique items, and it’s something you can’t possibly pass up if you want to give your car some personality.

It’s made from plywood making it light and convenient.

You could definitely hang it in a variety of places other than your car, such as your keys or somewhere around the kitchen… especially if you’re worried about magical crates suddenly appearing in the middle of the road if you keep it with you while driving.

The love for the magical tiki mask continues with this mesmerizing watercolor print from SmileyIrisArt.

Magic is all around us, but most of all it’s within us.

That’s what this beautiful image seems to represent. And it’s a message I would like to spread around the Crash Bandicoot fandom.

Also this would make a perfect gift for those friends who get all their decor tips from Tumblr and Pinterest.