The quintessential all-American animated sitcom Family Guy is pushing 20+ years of hilarious musical numbers and satire on American culture in the most unfiltered manner.

Such an iconic series has given rise to batch after batch of merchandise for fans to show their love for Rhode Island’s most infamous cartoon family.

The more choices we have, the harder it is to discern what the best options are to buy(for ourselves, our friends, and our family!)

To save you some time and streamline the shopping process, I’ve put together a list of some favorite Family Guy merchandise that you can get right now, for yourself or as a wicked sweet gift.

Some characters are just too complex to describe in a few words.

Is Brian an alcoholic dog? An existentially anxious canine? A labrador retriever with a taste for the good things in life?

I think we’re better off just showing everyone what Brian is all about, and few pieces of merchandise do it as wonderfully as Kidrobot’s 3’’ figurine of Brian enjoying an elegant martini, complete with an olive decoration!

What really makes this one for me is the absolutely disinterested look on his face. He’s having none of your nonsense.

If you liked that Brian figure then perhaps you’ll be interested in acquiring the whole set from Kidrobot’s Family Guy line.

Another one of my favorites is this one modeled after Quahog’s resident macho Police Officer, Joe Swanson, complete with a wheelchair to display on.

Our challenges are part of ourselves, and Joe Swanson is a prime example of how true that can be. Being paralyzed from the waist down doesn’t keep him from being a total badass when he needs to.

He’s just a regular guy, waiting for you to add him to your Family Guy collection.

The thrill of not knowing what you’ll get; the excitement of opening up the capsule to reveal what luck has in store for you.

Very often, the disappointment of having wasted your money can feel like too much. If you’re over gambling and would rather know what you’re getting into then this set of 10 vending machine toys is for you.

Iconic looks of beloved characters such as Mutant Stewie, Brian the Police Dog, and Peter the Showman are just a few clicks away.

Renowned toy manufacturer Mezco has settled on “Clevemire” for this wonderfully disturbing 6’’ figure.

After the events of Y2K in the episode “Da Boom”, the two polar opposites are joined at the hip due to radiation. As you may expect, hijinks ensue. And if you’re a classic FG fan then you’ll definitely remember this episode from the golden years of the show.

Mezco is known for their high quality and creative designs with a lot of attention to detail, and this Family Guy figure is just one of a long history of honoring the show with masterfully crafted merchandise.

This amiable and mild-mannered dude was originally designed just to challenge preconceptions about African-Americans in the show but grew into a star of his own right after The Cleveland Show began airing in 2009.

The completely lost expression on this figure is probably what his face must have looked like once he found out that The Cleveland Show had been canceled.

Instead of sending him back to Quahog, why don’t you give him shelter on your exhibition shelf? 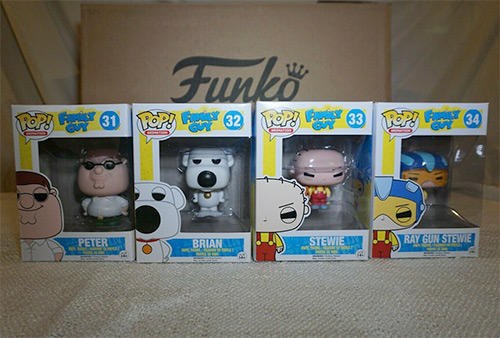 Being such a relevant series, Family Guy has received countless Funko Pop figurines over the years.

In this bundle you’ll find some of the most classic pairings in the series, like drinking buddies Peter and Brian as well as the enterprising duo of the show: Brian and Stewie.

It also features Ray Gun Stewie, for those of you who can’t get enough of the sinister baby.

Socks can be either an inconspicuous way to show your fandom love, or a flashy fashion statement to break the monotony of everyday wear.

We’re not NPCs in a fantasy RPG, you know? Variety is what keeps fashion alive.

Family Guy themed socks can be anything from cute to irreverent. But the one thing they’ll always be is iconic and incredibly recognizable.

Speaking of irreverent merchandise, consider this mug depicting Stewie in the middle of beating down Brian to collect on his debts.

It’s safe for use with any household appliances such as microwaves, and it’ll do a wonderful job holding your Colombian coffee as you catch some Family Guy YouTube clips for some mindless yucks.

I just hope you didn’t take out any shady loans to get it.

It’s much softer than Stewie’s attitude towards his family, and its vivid colors will last longer than a joke being run into the ground by Family Guy’s special brand of humor.

This pillowcase is the perfect gift for any fan of the sinister infant or any child who needs to know you love them, despite their desires to take over the world.

Drinking games are something anyone with a taste for liquor can thoroughly enjoy. They’d be a home-run with the Family Guy cast.

Therefore, there really can’t be a better theme for drinking dice than Quahog’s band of alcoholics! It’ll give your get-togethers the touch of irreverent comedy needed to make them truly memorable.

Just pull out the dice and let the booze flow.

Many children all across the world report hearing noises under their beds and seeing entities in their closets late at night. Chris Griffin was one of these unfortunate children, doomed to be ignored whenever he complained about the evil monkey living in his wardrobe.

Now instead of tormenting Chris every night, the monkey can rest on your desk to keep you company on long working nights.

While he comes in his usual pose, this bendable figure will let you twist him however you want.

Just think of it as if it were your boss. Oh, the bending you’d do…

The holidays are just around the corner and we’ve got the perfect gift for the organized Family Guy fan.

This calendar features a different scene or quote from the show on every page, and has a page for every day of the year.

You’ll always have something to look forward to. Be it Peter duking it out with a chicken or Stewie plotting world domination, there’ll always be a bit of Family Guy charm to perk your mood right up.

Secret Santa has never been this easy. 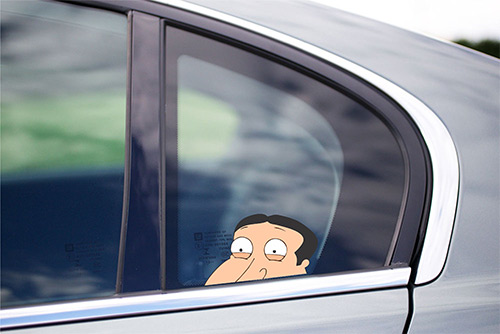 Quagmire is notorious as one of the kinkiest characters in modern American television.

That just makes this outdoor vinyl for your car’s window all the more appropriate! Have Quagmire peeking lewdly at the sexy hijinks happening all around your car, while also diverting attention from what may be happening inside… 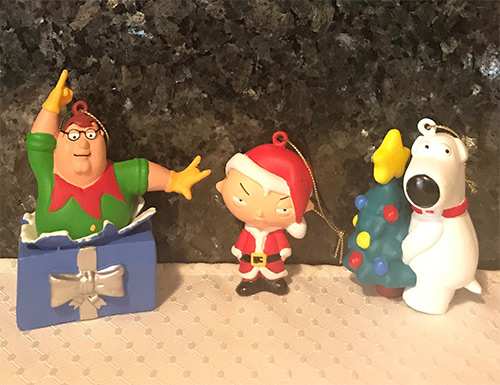 No All-American Christmas will ever be complete without some wacky ornaments on your tree.

This year get a little something for that Family Guy enthusiast in your life. Maybe this vintage ornament set will do the trick including Santa Stewie, Santa-helper Peter, and a very industrious Brian setting up a new Christmas tree.

I know the Griffin family and their neighbors have a great Christmas spirit, so let them bring some to your holiday as well. 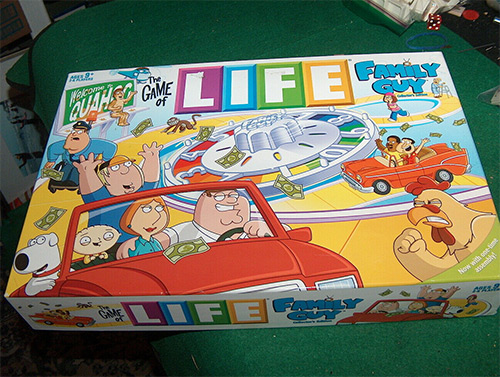 The only thing more random than The Game of Life is life itself.

This collector’s item for both Family Guy lovers and board game aficionados will have you driving around Quahog with the Griffins, visiting iconic locations from the show like Cleveland’s Deli and the Pewterschmidt Mansion.

Few things are as American as turning a savagely capitalist illegal practice into a board game. Not to mention licensing classic American characters to sell more copies of said board game.

And you know what? It works!

This Family Guy-inspired version of Monopoly features custom tokens of every member of the Griffin family, and a board including locations like the Sovereign Nation of Petoria and The Drunken Clam.

Reminisce about your favorite episodes over a cutthroat game of driving people into bankruptcy. 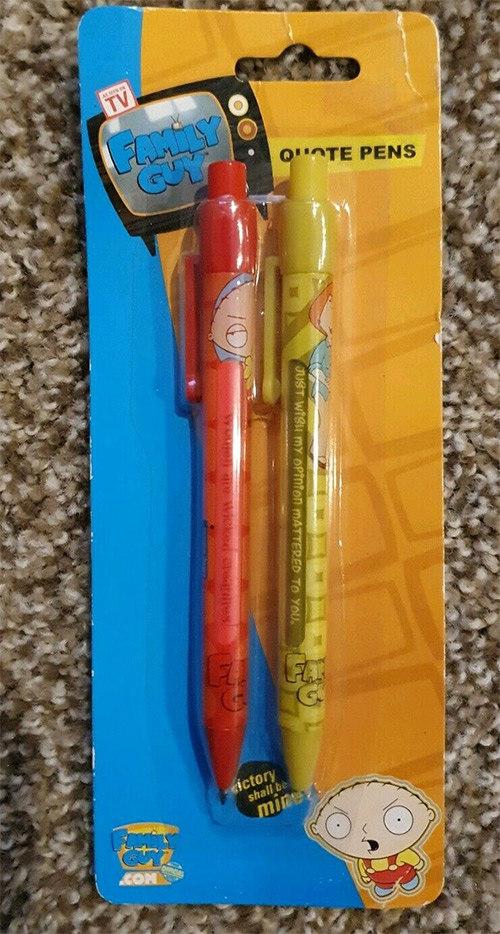 Quote pens are a nice little way to remind someone of good times.

These ones feature illustrations of Stewie and Lois, saying some accurate stuff that I’m sure will remind you of someone in your life.

Be it Secret Santa, an office birthday, or simply a gift for when you don’t want to look like you’re trying too hard, you can’t go wrong with these collectible pens. 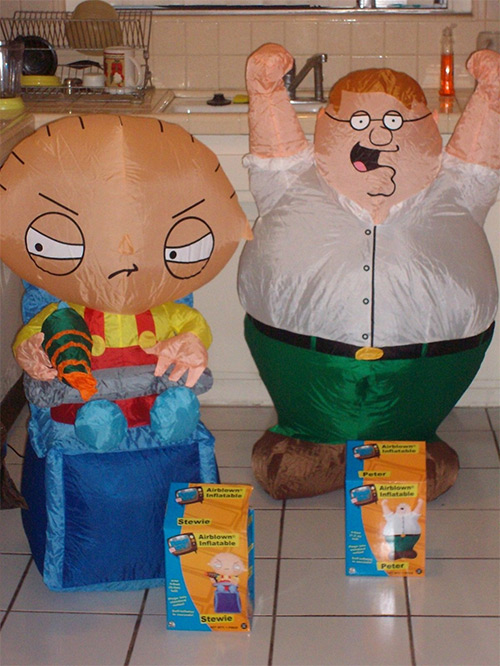 Are you in need of someone to welcome your guests?

Have Stewie and Peter greet your friends and clients without the need for any complicated set-up. These 4ft tall characters will inflate automatically once they’re connected to the AC.

It’s the perfect way to bring some spice into your decorations, and look like you’re making a big effort… when all you did was plug them in. 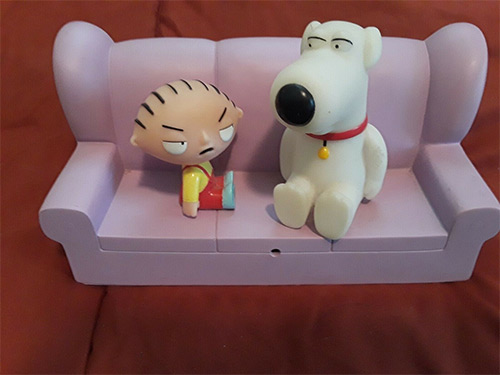 Even the simplest things can be improved with a little ingenuity and licensed products.

This cynical duo of dog and baby will bombard you with quotes from the show every time you turn your TV on or off, and even when you change the channel!

Place them on top or under your TV and you’ll always have some of your favorite show, even when it’s not airing.

Note this is a classic retro collectible so you may have tough time finding a copy, but if you keep an eye on eBay you’ll eventually find some out there for sale. 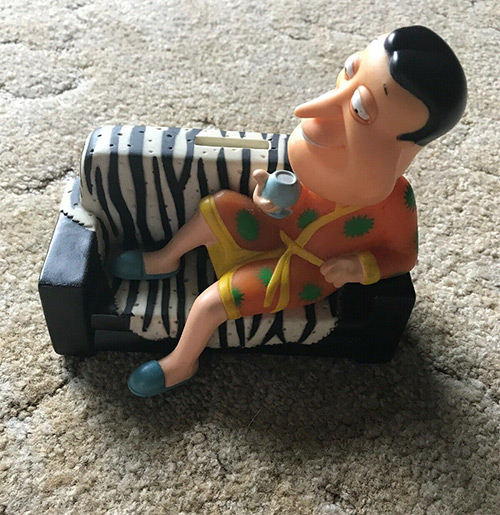 Considering his signature “Giggity!” move, I think a bobblehead is the single most appropriate figurine for Quahog’s resident pervert.

This Quagmire figurine is made by Funko so you know it’s high-quality. Just look at this tiger of a man and tell me you don’t want him in your living room.

Don’t try to hide it: you’re in love. Giggity. 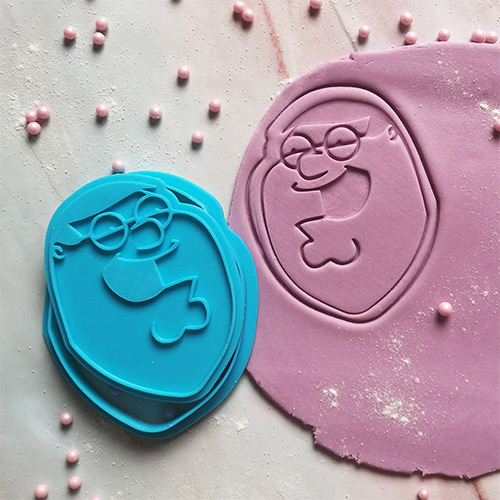 If you’d rather steer away from the risqué, here’s a simple and cute item that’ll make baking cookies even more fun.

This 3D-printed Peter Griffin cookie cutter from CookieFan3D at Etsy has everything you need to section the dough and press in the details. Family Guy cookies in two simple steps!

If you like them or want to get this as a gift, you can also get the rest of the Griffin family and complete the set. 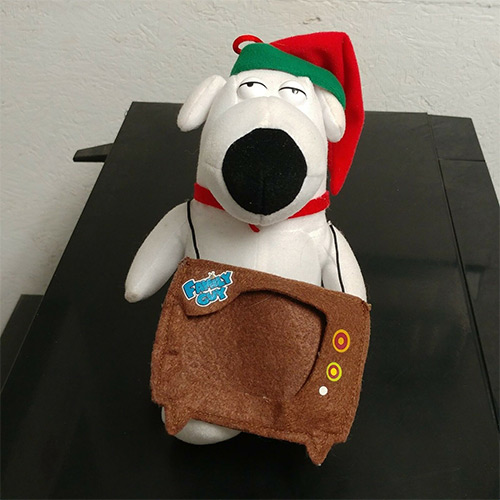 Sometimes you kinda know what people like but have no idea what to get them for Christmas.

This soft and charming Brian plush is brimming with Christmas spirit. Well, as much as the alcoholic dog can muster at least.

Get it for anyone who loves Family Guy along with a hefty gift card… and maybe include the link to this article as well. 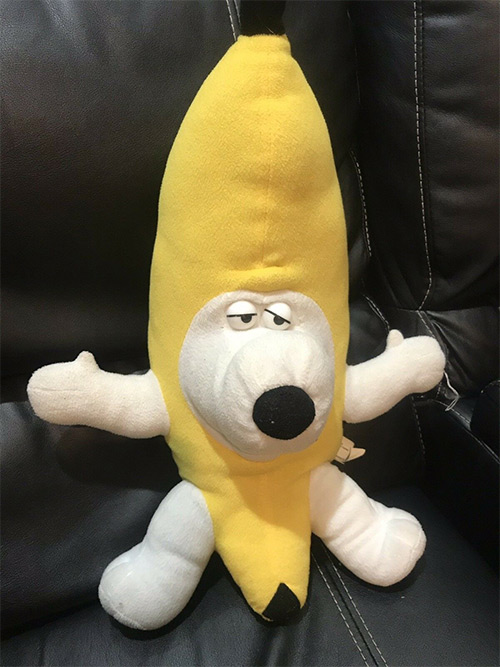 It’s hard not to feel sorry for the poor intellectual dog who always gets roped into the most ridiculous situations.

Get it for that one friend who always fails at being the voice of reason, or simply for anyone with a thing for dogs in costumes. With this on your desk it’s always peanut butter jelly time, all the time. 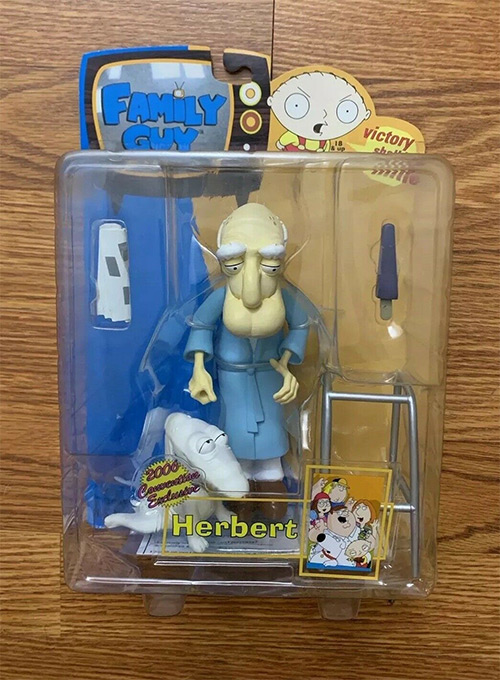 Herbert doesn’t always get the appreciation he deserves, despite being one of the funniest characters on the show.

This figurine of the US Army Vet with a strange interest in boys was made by Mezco exclusively for the 2006 San Diego Comic-Con.

It’s a highly sought after collectible, very rare, and even comes with the geezer’s just-as-ancient dog too.

This makes an incredibly funny gift for any fan of the show. Jake sure to keep him on a high shelf, well away from unsuspecting children.