It’s been more than 50 years since the original showing of the British-American film “The Pink Panther” back in 1963.

It was the movie that introduced the world to the irreverence of the Pink Panther character, along with the instantly recognizable Pink Panther theme by Henry Mancini.

However most people remember the Pink Panther and his “nemesis” of sorts, the Inspector, from the evidently more popular and infinitely culturally relevant cartoon shorts.

They were shown both in theaters as small features preceding the movie, and later on several TV networks across the globe.

Whether you’re obsessed with the sly panther or the comically unlucky inspector, it’s hard not to love the characters after they’ve entertained us for decades.

Now for those of you who just can’t get enough of the funny feline, well browse through this compendium of gift ideas that are just perfect for Pink Panther fans.

The Pink Panther has always been a man… well, an animal of culture.

These classic tasteful pajamas are perfect for such a character!

Intricately detailed with great care, quite obvious a lot of work was put into making this more than a run-of-the-mill plush.

This sleepyhead is made of soft washable polyester and features such as the eyebrows are stitched rather than simply plastered on.

Whether you get it as a gift for a fan, or simply to add some light-heartedness to your room’s decor, this Pink Panther plush is sure to bring a smile to anyone’s sleepy face.

This officially licensed Pink Panther isn’t only super-soft and incredibly cute, but also very true to the panther’s cartoon design.

It keeps the same color scheme along with the exact same elegant slim proportions of the famous gentlecat!

It’s pretty big, perfect to decorate a sofa or hang around a bedroom, and thanks to the top-notch materials and well-made stitching it should last you a very long time… that is, unless you give it to your dog.

On the polar opposite of the show-fidelity spectrum we have this cute and shorty Pink Panther stuffed plush.

It’s like the guy’s face was stuck to a different body!

Even so, that doesn’t stop it from looking adorable.

It’s made of excellent washable polyester so it won’t become worn out anytime soon, and the color will also remain just as vivid for a long time.

This would be perfect to have laying around a wide sofa so you always have something to rest your head on when you spontaneously decide to take a nap.

Imagine it’s one of those days where everything seems to go wrong.

You had to skip breakfast, got late to work, had an awful time dealing with clients and now, on your way back home, someone cuts you off in traffic.

At that moment when you’re about to lower your window to engage in verbal warfare, you notice a bobbling head out of the corner of your eye. It’s the Pink Panther, sitting on your car’s dashboard in absolute zen relaxation.

Its rich pink color soothes you and you remember it’s better to chill and focus on the positives.

Aren’t you glad you bought this thing?

Perhaps you’re not one for discreet ornaments and small details, but rather a lover of big gestures and even bigger plushies.

This gigantic Pink Panther by Bokl is just that, with sizes ranging from 60cm to 130cm tall depending on whatever you want.

You can also choose whether to get the standard panther, or one with a “We love Pink Panther” shirt, as if buying an oversized plush wasn’t clear enough.

As a celebration for the show’s 40th anniversary, manufacturer Palisades created this cute little figurine depicting Inspector Clouseau doing what he does best: getting the short end of the stick.

The poor guy has such bad luck!

Even in the original movie he ends up in jail for a crime he didn’t commit, and in this case it seems like something blew up on his face.

This misfortunate gentleman would look great on a desk, or in the hands of a young one playing his part in a thousand stories. 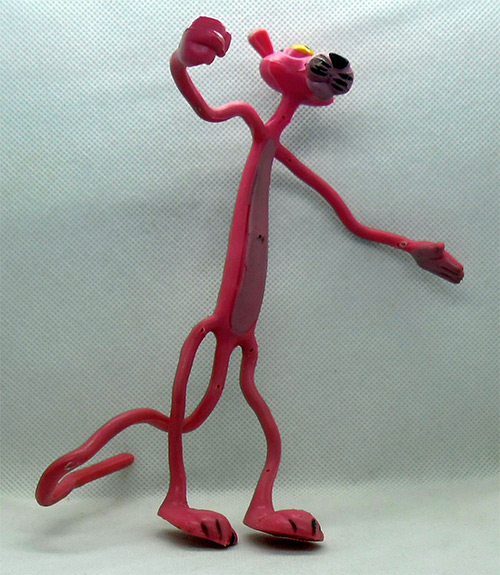 A bendy toy with hyperdeformed proportions seems strangely appropriate for the sly panther.

I mean, he doesn’t really bother much with the laws of physics in the show either right?

This old-school toy from the early 2000s was a riot back when it first came out.

Back when toys were… simpler, so to speak.

Wrap him around a chair, a door’s handle or wherever you feel there’s a definite lack of pink. You can also twist him around to achieve a great variety of poses to help with stress… but be careful. He’s vintage, you know? 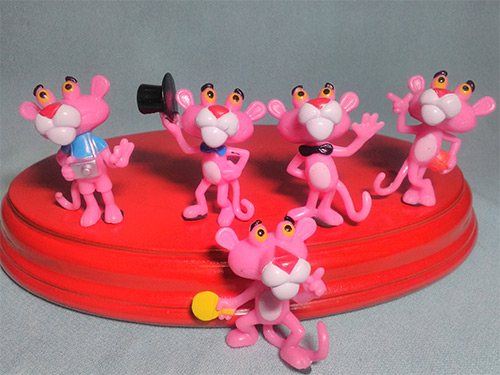 If you want to turn the clock back even further, consider this pink army of cutesy felines from before the 2000s were even a thing.

At one moment he’s a tourist, then he’s a ping-pong player, then a showman and so on.

It’s a remarkably nice decoration to arrange on a desk, or around a room for a speck of pink here and there. You could even organize an egg-hunt in the garden!

I’m sure the PVC rubber can withstand the elements just fine.

Clothing with Pink Panther designs has been popular ever since pop culture apparel became a thing.

If you’re interested in authenticity you really can’t get any more “official” than this 100% cotton t-shirt commercialized by MGM Studios itself.

Its design brings the panther’s trickster nature to the forefront, albeit in a slightly sinister film noir style.

It’s a must for anyone who wants to show their love for the feline without the color pink playing a big part in their outfit.

If you want to dress up as the iconic anthropomorphic panther you really only have two options.

You either don a full-body jumpsuit, or you go for the bodypaint approach.

Pro-tip: One of those might get you arrested for public indecency.

So save yourself a bad experience and just buy this bright pink high-quality Pink Panther costume!

It comes with pink shoe covers and even soft panther mittens. This thing might as well be a onesie with how comfortable it is, so leave all worries aside and go party like it’s 1963!

To repurpose a phrase from another famous franchise… You either die an Inspector, or live long enough to become the Panther.

Do you like to hike? Do you go to school? Is your laptop always with you?

If any of these is true then you probably already have a bag. But you know what?

That bag sucks. That bag isn’t pink, and it most definitely doesn’t have a cute hanging Pink Panther accessory. Your bag is boring.

This bag from Flyty, however, will be pretty unique.

After almost 60 years the Pink Panther isn’t as pervasive as it used to be, so apparel depicting the feline has become more of a niche thing among young people. It’s actually available in several colors but come on, get the pink one!

If you’re in the mood to set up the ultimate Pink Panther groove in your room then this themed bedding set from Peachy Baby is just what you need.

And it includes everything necessary for a Pink Panther room – even the pillow covers are themed.

I couldn’t possibly write a gift guide without Christmas ornaments!

Hallmark collectibles are among the most recognizable items you can get for a Christmas lover – double points if they also like the Pink Panther.

This Santa Pink Panther first made in 1993 is an amazing addition to any Christmas tree, and it’ll send anyone on a trip down nostalgia lane.

There’s something about being wrapped in warm sherpa that just soothes the soul.

This Pink Panther sherpa throw blanket is perfect to sit down and read a book by the window during the colder months.

It’s not just a nice extra-warm pink addition to any bed or sofa, but also hypoallergenic, so it’s fit for babies or anyone with sensitive skin.

Now if what you’re looking for is a very special gift to make someone think of you each time they see it, then this Pink Panther music box will do the trick.

It plays the Pink Panther theme transporting anyone back to the past.

But it’s also a beautiful decoration with a lot of potential to create new memories. Get it for your sweetheart, or your child, or whoever makes your heart grow tender. Or just get it for yourself, you know you’ll love it.