If you grew up from the late 90s and had Cartoon Network, then you’re definitely familiar with the blonde muscular but dumbfounded Elvis Presley-esque womanizing character.

From the pilot episode that aired on Cartoon Network in 1995 to the series finale on August 27, 2004, Johnny Bravo became a recognizable figure. Not just in the cartoon industry, but in the entertainment industry in general.

And because the show went on to become as popular as it did, it spawned a wide range of toys and merch that I just know fans will love.

So I’ve taken the liberty of putting this article together as a tribute to the scatterbrained, muscle-bound goof we grew to love.

If you share some love for one of the most iconic cartoon characters of the 90s then you can help yourself to any item from this list(or maybe pick one up as a present for someone you know).

We all know how much the Funko Pop lineup is all the rage these days. But don’t count the Lego-hand like Titan figures out of the picture.

The figure does justice to the main character thanks to how meticulously accurate its head looks, with its fluffed up Presley hair, its pinpoint accurate mug-shaped head, and of course Johnny’s iconic black sunglasses.

And this comes alone since we all know Johnny has some problem in the lady-attracting department.

But if you want to get this little guy a home he’ll work great as a desk toy or in a toy collection. You can even practice dramatic poses in front of your mirror. 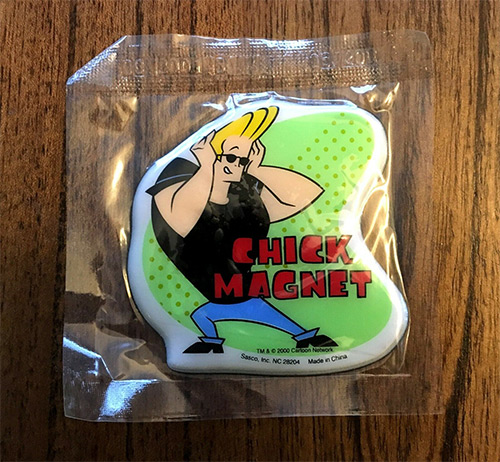 He’s done it, folks! Johnny Bravo is now officially a chick magnet…. for your refrigerator, that is.

This vintage puffy magnet, also sponsored by Cartoon Network itself was first released in the early 2000s. It’s one of the rarer collectibles out there and it would look incredible on any fridge.

Most being sold are in excellent condition so it’s easy to find as well.

Now you and your kids can walk into your kitchen and be reminded by Johnny how to be as positive and cool as him. Great way to get ready for the day.

Do you feel it?

The bold, energetic, dashing, and tantalizing lady-killing skills flowing through?

Well that’s because Johnny Bravo’s own briefs are working their magic.

The next time you feel like hitting the beach or just taking a night out on the town, you can slip on a pair of these and let nature take its course. Or grab them for a family member who’d love them.

It soft to the touch and the materials are great for keeping everything in place. 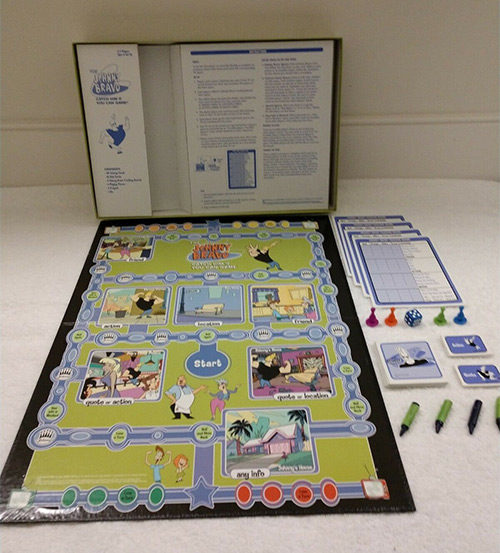 Catch Him If You Can Game

Bet you didn’t know Johnny Bravo had his own board game.

This is a fun little game that’s sure to fill the room with a share of smiles. It’s great for kids between 4 to 6, or anyone older if they’re fans of the cartoon.

You get to play around imitating Johnny or any of the other fun characters like Little Suzy, Carl, Mrs. Bravo, or Pops.

Unlike Johnny, players use intuition and deductive reasoning to locate the titular cartoon character as he’s missing for some reason. Each turn in the game is packed with surprises so it’s actually a really fun role playing setup.

Players go around entering Johnny Bravo Scene Spaces and show other players use their Hint Cards… the rules are a bit complex but all explained in the rulebook.

The idea is to take notes and match up which players are where, whom they’re with, what they’re doing, and if they know where Johnny is.

And whoever guesses all of the cards that are in a player’s hands wins the game. Easy, fun, and classic 90s.

If Johnny were to look at this, I think he’d be like “Ohohoho Mama, do I look gorgeous or what?”

Something like this would really suit the narcissistic personality of our favorite blonde imbecile.

The mug is microwave-proof in case you want to reheat your tea or coffee. It also makes for a great gift for basically anyone who knows this cartoon show.

Enjoy your drink as you strike a classic Johnny Bravo pose.

The show might be gone for now, but that doesn’t mean we still can’t relive some of the best episodes that made Johnny Bravo a star.

The first season is where it all started and with this box you get all 13 glorious episodes in DVD-quality.

This season was known for some of its most hilarious pop-culture references, featuring spoofs of The Wizard Of Oz, Jungle Book, Schoolhouse Rock, and Dr. Seuss.

It also featured a variety of guest appearances from celebrities such as Adam West, Donny Osmond, and Farrah Fawcett, as well as classic Hanna-Barbera characters such as Scooby-Doo and the Mystery Inc.

Slip this 2-disc special in your DVD player and rock on like Bravo.

I’m not exactly certain if I’ve seen Johnny wear any socks… but if he did it would certainly be cool, hip, sassy, and stylish like this pair.

These socks are made of 100% top-quality polyester fabric that aims to keep your feet warm and dry – not like Johnny’s women-attracting abilities, but that’s neither here nor there.

They also come with a cushioned heel for durability, shock absorption, and comfort. Just in case you take a wrong turn like Johnny and fall from a height that’s a bit higher than you’d like. 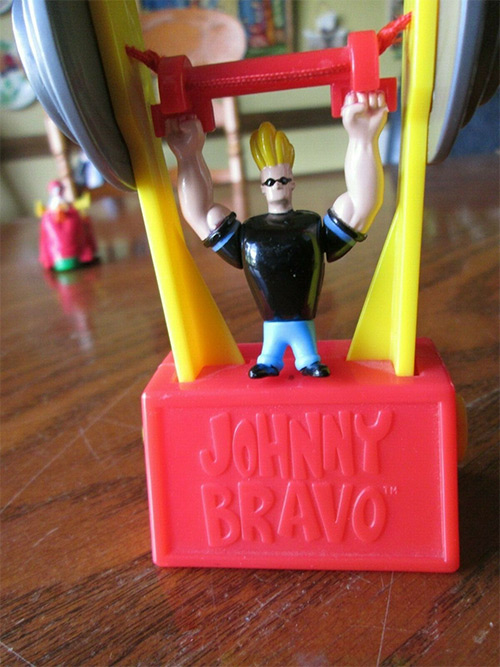 I will say this about Johnny: he really enjoys working out to keep his body fit and toned.

And that’s why this retro weightlifting collectible toy is the perfect reminder of this classic cartoon.

The oversized barbell with the bulging muscles really does justice to the character.

What’s more is that even though this toy is decades old you can still find plenty floating around for sale. 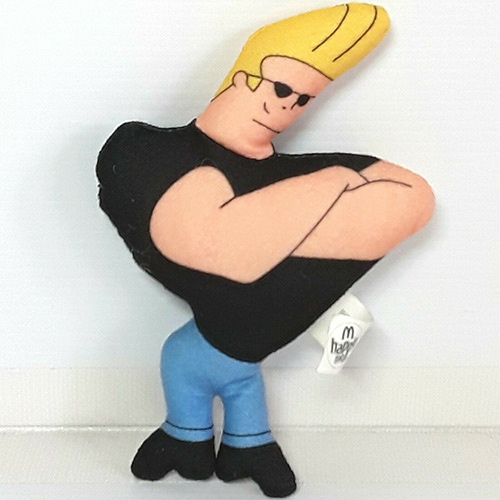 If you’re yearning for an awesome Johnny Bravo plush toy, well now’s your chance to get one.

Most are older collectibles being released in the 2000s but there are plenty available.

This plush stands at almost 13.5 inches and has just the amount of details that would even stun the original Bravo.

Travel back in time and witness Johnny becoming the star he is today with this 1997 vintage poster.

It features character designs from the first season as well as a couple of playful little activities for some entertainment.

And if you’re a fan of the show, which I know you are, you’ll also enjoy some of the nostalgia sauce that comes with this poster.

You can hang this masterpiece up on your bedroom door, closet, or simply hang it up on your wall and enjoy. 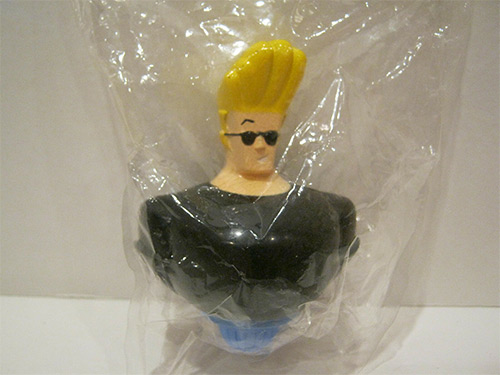 And there are still quite a few floating around to this day.

You can find some in packaging, some without, but all are worth grabbing for a true JB fan.

Watch him spin with his one eyebrow raised and smile on his face. 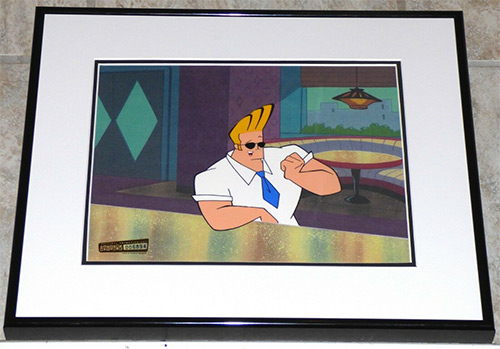 Here’s one more outstanding blast from the past.

This is an original production cell straight from Hanna-Barbera and Cartoon Network. It was actually used in the animation process to create episodes frame-by-frame.

Some cels come with frames, others don’t, but one thing is for sure: this is an incredibly rare collectible that any true fan will adore.

Most of these animation cels also have the vintage Cartoon Network seal at the bottom with a certificate of authenticity. You might even be lucky enough to find a signed copy!

Absolutely the perfect gift for any true Bravo fanatic.